Right, please grab a cuppa and something to eat, you may be here for a while.  I intended to do this some while back and  I do apologise, it’s easy to keep on putting things off and that’s what I’ve done I’m afraid.  It’s bad of me, particularly as what I’m about to waffle on about has pretty much monopolised my time over the past year and I know I’d regret not getting it all down while it’s (reasonably) fresh in my mind, so, here we go – the story of my  Frog Graham Round.

Not heard of it? It’s obviously owes it’s title to the more famous 42-peak circuit of the Lake District (the Bob Graham Round), but is nowhere near as well-known, despite being around since 2005. The guy who came up with it is Peter Hayes, a university lecturer from up Durham way; he authored a book called “Swim Hiking in The English Lake District” and this is where the Frog Graham Round – or FGR – is defined. It’s a circular route of the NW Lakeland fells covering about 40 miles and 15,800ft of vertical ascent, the tricky bit is that there are four lakes to swim across enroute to the finish in Keswick. I’d heard it being talked about a few years back, but really didn’t give it too much attention until some fell-running/triathlete friends stated their intention to give it a go and I investigated further. I was surprised to find that less than 10 people had successfully done it since Peter’s inaugural round in 2005, perhaps indicative of the severity of the task but possibly simply because the fact of its existence isn’t widely known. I was immediately hooked and thought that this was something I could do, my goal there and then was to be one of the first ten people to get round.

Details on the FGR were scarce. Peter’s book is quite hard to get hold of, although you can download it from Amazon for your Kindle. A chap named Richard Walsh maintains a website that details the basics of the round and the list of successful completers, but there’s not much more. I then looked at the people who had got round thus far and the most notable was Tim Mosedale, whose name is well known in the outdoor world.  Tim is a  four-times Everest summiter (that’s fairly hard isn’t it?), he’s also the bloke who in 2015 decided to raise some money for charity by doing the big Lakes triple – in this case that meant swimming the length of Windermere, cycling the Fred Whitton route (112 miles) and following that with a Bob Graham Round. Once I’d found Tim’s blog, I had some hard details of the FGR to go on.

I could spend a long time writing about my preparation for this, way too long. Those who know me and my fastidious nature will have no doubts that I recce’d the route thoroughly (a good part of which I knew pretty intimately in any case) and had a great time doing it, clocking up some serious mileage and making some appalling navigational decisions in the process, well, you have to explore all options don’t you? From the very outset I felt that the key to success was making it so that the four swims – across Bassenthwaite, Crummock Water, Buttermere and Derwentwater – were just incidental obstacles along the way because, truth be told, there’s actually more feet per miles ascent in the FGR than the BGR and considerably more than long, tough fell races like the Old County Tops, so survival on the fell was going to be main thing. If I couldn’t complete each swim and follow it with a hard fell section, then it was clearly going to be a non-starter.  But how to make it so that swims were just “incidental obstacles?”  A bit tricky I thought.
I love swimming and picked up the reins several years back when I began to compete in the odd triathlon. However, my technique sucked and although I had a useful turn of speed over shorter distances, I felt it needed to be better for an attempt on the FGR. I had sinky legs, a number of dead spots in my stroke, a rubbish catch and was prone to crossing over from the left. I eventually cured the majority of these problems, but it was a long, long and very tiring journey for a bloke whose life is already jammed full anyway. It mostly consisted of three morning sessions a week, up at 0530 to be in the pool by 0630. I was helped along the way by my swim partner Emma, but as time went on she had to give up on our sessions due to her business expanding and early morning PT clients. It was up to me and I won’t deny I found it hard to keep the momentum going, particularly over the winter. I stuck at it though and my swim stamina slowly improved and I began to enjoy it a lot more. My body shape changed and I developed some proper swim muscle, my weak left shoulder became a thing of the past and I knew I was ready when I was knocking out 3,000 metres before going to work. I should add that as the weather got better I was swimming more and more in open water, my triathlon club has access to the lake in the middle of Ripon racecourse so I was in there whenever possible. Of course, I was also swimming the lakes of the FGR as well, however this didn’t go too well when I tried to swim across Crummock Water the week after the last snow of the year – it was icy, bitterly cold and I got out of there so fast I think I just skimmed across the surface. Not a good start really and it didn’t do my morale any good. It was the Old County Tops fell race the following week and it was a  tough outing in bad conditions, so I thought a little swim the next day would give me a good idea of where I was. I decided to swim from Calf Close Bay on Derwentwater to Rampsholme Island (the last mandatory CP on the FGR) then swim back. I was absolutely knackered, it was a real fight and gave me some idea of just how bloody hard this was going to be. If I’d known just how hard, I might have given up there and then.

Insane.  They were right. 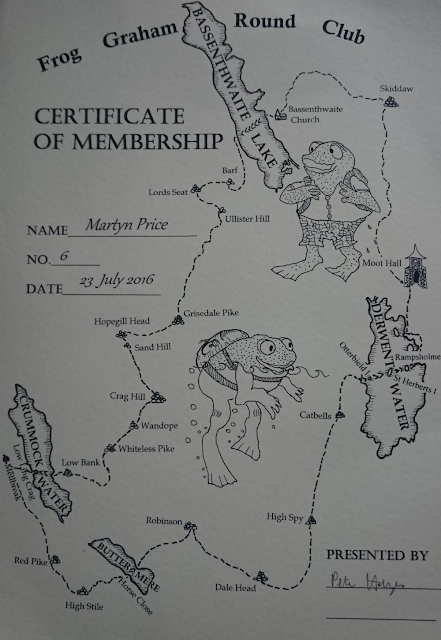 Since I completed the Frog Graham Round there have been over 30 further individuals who have successfully completed it and in retrospect I realise that I could have saved a lot of time on the day with a few minor tweaks to my planning, however the round was still a relatively unknown quantity at the time.  If you are interested in attempting the FGR, I recommend joining the dedicated Facebook group where you will find a lot of useful information, plus of course the Frog Graham website is the best resource available.  Good luck!
Posted by Martyn Price at 16:20 No comments: