I did the Langdale Horseshoe fell race on Saturday and things didn't go quite to plan.  I'm saying this with my tongue firmly stuck in my cheek, because I got round the race in a half-respectable time and in retrospect, I couldn't have hoped for much more as on Friday I was actually on the verge of pulling out; I'd felt like crap for most of the week (some kind of virus going round) and this had really pissed me off as Langdale is one of my favourite races, I had an absolute belter there last year and was hoping that this year's training tally was going to help me to another PB. I'm ever the optimist.
Saturday morning arrived and I woke up feeling a bit better, not quite 100% you understand, but well enough to drag my sorry arse around the course.  We set off for the Lakes and the weather didn't look good, early rain gave way to some heavy mist and as we drove up the valley from Ambleside the mountain tops were obscured by some ugly looking black clouds.  Not good, but the weather forecast did say it should brighten later.  Anyhow, following the usual kerfuffle, kit checks and gossip the race got underway and it was clear from the outset that it was going to be emotional.  The rocks were very slippy and the ground was absolutely sodden .... I've been in these parts many times and I genuinely can't remember seeing it this wet.  Of course, there were bound to be accidents and very soon I saw the first, a girl had slipped on a rock close to Angle Tarn and really smashed her knee, there was a lot of blood and gore on display.  Poor lass, it was really mangled and I daresay she won't be wearing mini skirts for a while :-(  There were similar accidents on the horrible traverse under Esk Pike and on Bowfell summit and I'm not surprised, for some reason the rocks coming down off Bowfell felt really greasy and everyone was being cautious.

Things started to brighten up as we dropped down to Three Tarns and began to negotiate Crinkle Crags, I was on a mission here to get the correct line and very soon noticed that several other runners were clearly following me - I felt like the Pied Piper of Hamelin.   Long Top came easily and we swiftly nipped around the Bad Step bypass and very soon I was on that long descent down to the foot of Pike O'Blisco and Red Tarn.  I usually enjoy this a great deal, but today I just wasn't running well and Helen easily managed to stay in front of me.  My legs hurt, they had no boing in them at all and to be honest I was happy just to stay with her.  We slogged up up the final climb together and then across the POB summit plateau, from there on it's one of the best descents in fell running and I'd really been looking forward to it ..... today I was stiff and unwieldy and not running like I wanted to.  Helen had been chasing the girl who beat her to second place at the Grand Tour of Skiddaw and had the bit firmly between her teeth, I was just holding on for dear life and doing my best to stay upright and I didn't manage it.  My right hamstring cramped up badly, I slipped and did a 20ft powerside down the fell, hitting something hard as I did it.  I waved Helen on, but it took a few minutes to shake the fuzz from my head and get back to a decent running pace.  By then any thoughts about my finishing time had gone out of the window and so I slogged down to the cattle grid at the top of the zigzags, charged down through the campsite and then to the finish line in about 3hr20m, so about six  minutes slower than last year and one or two minutes behind my chirpy and speedy wife. 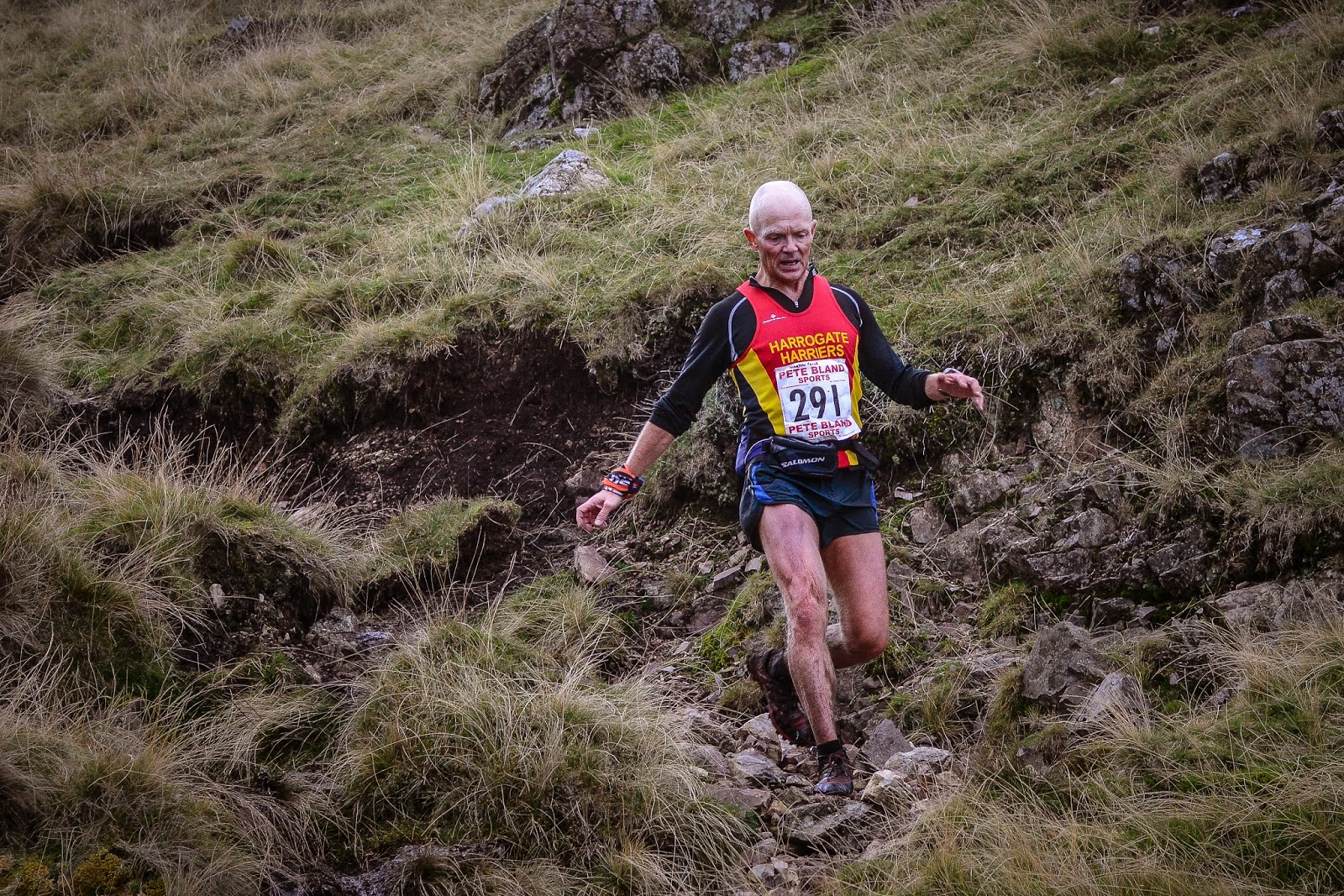 It looked like a warzone at the finish, it seemed that everyone had blood trickling from at least one limb and the rumour was that Mountain Rescue had been deployed to bring three casualties off the course.  The Search & Rescue helicopter had arrived and was in the process of bringing them to safety, all very dramatic but not really what you want to hear - this was a sporting event and while fell running is inherently dangerous, nobody wants to hear about these things.  Other injuries were much in evidence and I was only mildly surprised to see blood streaming down my own right leg; it transpires that my powerslide contributed to a deep gash in the back of my thigh and I hadn't been aware of quite how bad it was.  Nothing compared to what had happened to some others of course.
In total there were seven of us from my club (a record for this race) and we managed to land two prizes :-)  First home was 65-year old Ben Grant who is the current FRA MV65 English champion, he finished in a frankly unbelievable 2:52 and all I can say to that is I hope I can run half as well as him when I'm 65!!  Helen also landed a prize for 3rd LV40, she was actually first LV40  but two LV45s came in front of her if that makes sense.  One of these ladies was Nicky Spinks, so nothing to be ashamed of there.  Don't know who Nicky Spinks is?  I suppose you have to be into fell running .....

As I said, given the circumstances I was pleased to finish in a half-decent time and I suspect that I finished further up the order than I did last year irrespective of my finishing time.  Quite apart from not feeling 100%, I'm wondering if my poor(ish) performance could have been explained by a touch of dehydration?  Without wanting to get too gruesome, I didn't go for a pee until late on Saturday night and the more I think about it, the more I'm convinced that dehydration sneaked up on me and degraded my ability to run well.  Certainly I didn't drink anything on the way round the course and I was working very hard on the climbs.

Reflecting on the race, it makes for a dramatic story but the truth of the matter is that it nobody sets out with the intention of getting hurt do they?  Mountain Rescue?  Helicopters?  A & E units packed with fell runners?  It's not good, really.  A few people we know - who are all good ultra distance runners - were doing Langdale for the first time and complaining bitterly about the lack of runnability and dangerous conditions.  I sympathise, but have to say that this highlights what I've been saying for some time - that there is a world of difference between fell running proper and those who pound the trails on marked and defined courses.  We have a number of runners in my own club who have never been near any kind of fell race, let alone one as severe as Langdale and yet like to style themselves as fell runners and I have to wonder why?  It's not like the sport is sexy or even remotely in vogue.  You get cold, wet and dispirited, ocassionaly scared to death, your body frequently hurts and it can cost a fortune in corrective physiotherapy.  If you don't do it fulfill and challenge yourself, there's not much point.
Posted by Martyn Price at 09:04 No comments: